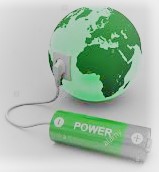 Earth is a chemical battery where, over evolutionary time with a trickle-charge of photosynthesis using solar energy, billions of tons of living biomass were stored in forests and other ecosystems and in vast reserves of fossil fuels. In just the last few hundred years, humans extracted exploitable energy from these living and fossilized biomass fuels to build the modern industrial-technological-informational economy, to grow our population to more than 7 billion, and to transform the biogeochemical cycles and biodiversity of the earth. This rapid discharge of the earth’s store of organic energy fuels the human domination of the biosphere, including conversion of natural habitats to agricultural fields and the resulting loss of native species, emission of carbon dioxide and the resulting climate and sea level change, and use of supplemental nuclear, hydro, wind, and solar energy sources. The laws of thermodynamics governing the trickle-charge and rapid discharge of the earth’s battery are universal and absolute; the earth is only temporarily poised a quantifiable distance from the thermodynamic equilibrium of outer space. Although this distance from equilibrium is comprised of all energy types, most critical for humans is the store of living biomass. With the rapid depletion of this chemical energy, the earth is shifting back toward the inhospitable equilibrium of outer space with fundamental ramifications for the biosphere and humanity. Because there is no substitute or replacement energy for living biomass, the remaining distance from equilibrium that will be required to support human life is unknown.
+ Full resport by John R. Schramski, David K. Gattie, and James H. Brown at PNAS