The majority of illness is caused by fecal matter.

More people have a mobile than a toilet.

Lack of community involvement causes 50% of other projects to fail.

In a world where resources are finite, inequalities in access to these resources open insurmountable gaps.
Access to water, the greatest exponent of the commons, whose right should be guaranteed by all the constitutions and human right laws in the world, is not only uneven but in many cases nonexistent.
Water is the main source of life for humans, for crops, for the planet and although not everyone is aware of it, also for energy.
In a finite world, in which fossil fuel reserves keep diminishing, the logic of good will, indicates that we should spend the reserves that remain to investigate alternative energy sources, renewable energy, but the problem is that the production of energy not only needs oil, but also requires water.

Some data on the amount of water required in energy production:
Therefore water is energy and as with other sources of energy, the contestants are taking positions to control the access and ownership of the fresh water; liquid wars are underway. The international lobbies coerce governments worldwide to accelerate the water privatization processes so that water stops belonging to the commons, to all of us, so that water goes into private hands, to large multinational energy and food corporations.
It is of key importance to keep fighting for the right to have water. It is vital that the water continues belonging to the commons and due to the imminent risk of losing that right, it is vital to have water sovereignty, to be self-sufficient in our freshwater needs, whether for consumption or for agricultural or energy.
What should be the strategy to achieve water self-sufficiency? Again it is necessary to return to Mother Earth and walk down the path of sustainability, taking into account the same four parameters which we discussed in the energy crisis.
The same four maxims that we have explained about energy, lead to the same conclusion in water management, the best strategy for the harvesting and water supply it’s a distributed and resiliente network in which harvesters are as well the consumers. A water P2P network.
The harvesting and storage of rainwater should be incorporated as a passive strategy (link to passive strategies) in the life of every community with a shared and distributed management. Our consumption can not depend on dams, reservoirs and private distribution systems that might apply rules and regulation that are contrary to our interests.
P2P Water 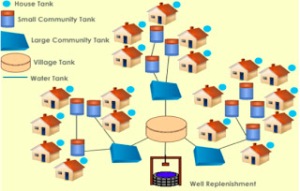 The water we will consume in the future will come from community rainwater harvesting and water reusing techniques for non-human consumption. It will be harvested and managed by a single network. Each consumer will be a core production hub whose scope will be defined by the community to which the node belongs. Sometimes nodes will be households, others will cover rural communities, and others will be buildings and other urban neighborhoods. Each of these nodes should analyze their needs in water consumption and size harvesting and recycling, adapting their needs to their own habitat, in order to have the least environmental impact in the process of creating the water P2P network and therefore achiving sustainability over time.
Clean water may be stored for human consumption, while recycling will give a longer life cycle, through water reuse as gray water (irrigation) and sludge (compost).
P2P philosophy applied to the water lifecycle provides the same benefits as to any P2P network
A water P2P network is a resilient network that will enable communities committed to these new trend, to maintain their quality of life regardless of external factors that otherwise would adversely affect their life.
+ Spanish version